The Beginning | Table of Contents | About | Cast | Latest Post 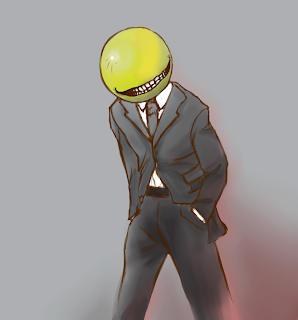 POWERS: Unknown (Suspected to be none)

BIOGRAPHY: Nothing is known about the Grin's history beyond that he first began operating sometime in the mid-50s. His one-man murder spree started with several ritualistic killings, leaving his victims with a horrific grin carved into their face. The murders showed no pattern beyond proximity and convenience--he preferred victims within the Metro area, and would often kill an acquaintance of a previous victim (it was later surmised that he selected new victims based on information taken from previous ones). Despite several manhunts, he always eluded capture--until he eventually caught the attention of the Society. A strike team of capes was assembled to bring him in--and thus began his career as the number one cape-killer.

Despite an apparent lack of powers or technology, the Grin displayed a near-supernatural knack for planning, preparation, and execution. Throughout the sixties and seventies, he murdered over 46 American registered capes--and considering his propensity for silence, it is both feasible and likely that he murdered many, many more. This alone nets him the highest registered cape kill count of any mask in the history of America. In one glaringly embarrassing incident in 1982, he nearly managed to kill Sovereign--a tragedy averted only by the timely intervention of Blink.

After the events of 1984, the Grin disappeared for two decades before resurfacing amidst a renewed murder spree during the mid-2000s. His brilliantly sociopathic career ended abruptly in 2006, when, in a televised showdown between himself and the Society, the Skull shot him in the head. Though clearly killed, the Grin's body has never been found. Several cults continue to insist that he is not dead, and will one day return.

DESCRIPTION: The Grin has never been heard to utter a single word. Attempts by experts to analyze his personality based on his actions have yielded little to no results; the few patterns his killings subscribed to were often far too bizarre to provide any insight into his character. On the rare occasions that telepaths have attempted to infiltrate his mind, the end result was nearly always intense psychic trauma followed by localized amnesia. Just who he was, what he wanted, or why he did what he did remains an impenetrable mystery.

The Grin's face was never seen--only his mask, which consisted of a yellow sphere that bore an inhuman grin. The only sound he was ever heard to make was the dull grinding of teeth clenching tightly against teeth--as if his grin was growing ever tighter. He communicated strictly through pre-printed business cards, arriving on a scene to deliver a silent ultimatum that would lead to anguish and death regardless of what choice his victims made.